Chang Woen has been a constant innovator with groundbreaking technology in recycling, according to Marketing Manager, Ted Kao

Chang Woen was established in 1976, initially as a company specializing in crushers and shredding recycling machines. Later, it developed the first PET recycling line in Asia back in 1992 in cooperation with customers.

At Taipeiplas 2018, Chang Woen will place emphasis on its latest machines, including the upgraded strength crusher, hydro extractor and squeezer, among many other special machines.

The Chang Woen factory is situated on a hilly side in the outskirt of Taichung city. The factory occupies a panorama view of the industrial city of Taiwan. Chang Woen has been supplying the local industrial cluster for decades, while at the same time fast expanding its international market reach.

As Chang Woen has been focusing on designing technology in reprocessing industrial and commercial waste, it aims not only to recycle but also to re-create useful materials for industrial multi-purpose production for a number of sectors including agricultural films, nonwoven materials, packaging bags, food and beverages industry PET post-consumer bottles. “Being placed at the forefront of the recycling chain, Chang Woen’s washing line (which consists of size reduction, contaminant removal and washing stages) along with its hydro-extractor and squeezer are essential in order to ensure the quality of pellets output,” remarked Marketing Manager Ted Kao. At Chang Woen, it is clear that waste is treated as a renewable resource and not merely a commodity. The machines have an in-house production rate of as high as 85%, which translates into higher quality control rate. This is what Chang Won wants to present as its core value of building a sustainable environment by promoting the importance of material reuse at Taipeiplas. Mr. Kao also shared the recent plans of the company and the future trends in the recycling sector.

Capturing emerging opportunities in recycling under policy change in 2018

Chang Woen will set up a branch in Vietnam. “It is to better serve our ASEAN customers and also to respond to the surging demands anticipated in Vietnam and Malaysia – which will be the key players in recycling,” remarked Mr. Kao.

Furthermore, 2018 is expected to be a year filled with volatile changes, thanks to the plastics waste import ban imposed by China. This policy has created a geographical shift to the producers of machinery as well as recycling business. Chang Woen has felt a revival in demand in Japan, Taiwan, and Hong Kong. They are starting some exciting projects with customers in Japan, as the Japanese manufacturers now must handle the waste domestically instead of exporting to China, thus they tend to select quality machines in order to meet the requirements in regulations. “We were fortunate to cooperate with Panasonic and introduce our crushers, extractors, and squeezers. In this field, Chang Woen was able to display its strength in building a total solution, while the Japan counterparts excel in single machines. The ability to formulate a comprehensive solution is thus much welcomed by the Japan customers,” according to Mr. Kao.

On the other hand, under the influence of Chinese plastics ban, “There is an increased flow of recycling line demand in Taiwan as a result of international plastics wastes being moved to be processed in Taiwan”, Mr. Kao explained.

Thus, Chang Woen received some new cases in assisting customers in Tainan, originally metal/plastic composite producers who aim to upgrade their production efficiency in order to face the “global race in recycling”, and outperform other recycling competitors in the Southeast Asia countries. In Hong Kong, Chang Woen has finished building a LDPE film recycling line (with shredding, washing and extrusion machines) for an agricultural mulch film recycler. “The washing line only requires two persons during the production due to the greatly automated features”, said Mr. Kao. It indicates that in Hong Kong where lands are scarce and labour cost expensive, the company is yet to have the capacity to make the recycling line valuable.

As Chang Woen team clearly puts it, recycling is not only as a fundamental task for building a sustainable economy, but also as a social responsibility. “It is great that a lot of corporates advocate using recycled materials for their products – and to build greener corporate images because the supply chain is closely knitted, emphasizing on the benefit of recycling and reuse materials means that the end users, the upstream and downstream supply chain suppliers must all comply to a greener way of economy”, Mr. Kao commented. The new squeezer will also be more energy efficient by reducing 10-15% power at the same production rate in comparison to their counterparts. This theme in building a sustainable environment will be the essential topic of Chang Woen presence at Taipeiplas 2018. The upgraded version of strength crusher would be the highlight of the exhibition as well – with deeper automation features, faster tool-change speed, and easier operation and maintenance.

For the coming days, Chang Woen is planning to be more involved in the recycling business, particularly by integrating intelligent technologies in automatic rubbish recycling, as well as material recovery facilities. It would mark another milestone for the company, and a step forward in the recycling sector. If you happen to be interested in these issues, visit Chang Woen at Taipeiplas 2018. 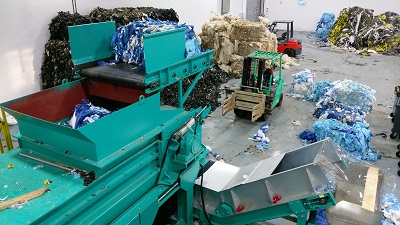